The Grant-making Process: What you need to know!

Making an individual grant to an organisation or charitable cause can be as simple or as complicated as the philanthropist desires. The philanthropists’ approach to philanthropy and the principles of giving that she wants to adopt (as discussed above) will influence the process of grant-making greatly. The process described below is for what could arguably be called a strategic grant-making approach in that it places value on careful analysis, selection and feedback against set goals.
It is assumed that the strategic grant-maker will have developed some sort of strategy for what she wants to achieve with her philanthropic efforts, and that the strategy will be intimately tied to a feedback system to check whether the planned activities are meeting the strategic objectives (otherwise commonly called “a theory of change”). She will also have considered the principles of her grant-making and these too will influence her process. In other words, these elements will provide the framework on which to hang the grant-making process.

A starting point is to become educated. It is tempting to rush off and support the first project that comes to the philanthropist, and that may be a good project, but if the intention is to be thoughtful and careful about the efficiency and effect of the philanthropy, then spending time researching, planning, analysing and mapping is necessary. Evidence-based funding, rather than funding based only on a “gut feel”, a relationship, or a desire, will have a better outcome and be a more strategic investment. Consequently, the philanthropist requires up-to-date knowledge and should perform the necessary due diligence on all proposals and projects.

For example, if the philanthropist has decided to support the early childhood development (ECD) sector then gaining some knowledge of the following is useful:

Once the philanthropists have gained some generalist knowledge of the area she wishes to support, then some time spent thinking about her role in the sector as against her strategy would be helpful to understand exactly what role she could best play. Reaching out to other stakeholders in the sector and building those relationships will help immensely in this analysis as well as for the future success of her programmes or projects. By this stage, the philanthropist should have a good idea of the type of projects and organisations she wishes to support and it could be very helpful to test her ideas and assumptions with other donors and experts in the sector.

The next step is to determine whether the philanthropist wishes to be a pro-active or reactive donor, although in truth, most philanthropists are both, with an emphasis on one or the other.

Arguably all donors have some sort of application criteria against which they evaluate and select applications but some donors choose not to write them down, relying on a more flexible approach to initiating the grant relationship, i.e. through conversation and interview, site visits, gauging reputation etc. Most large and long-standing donors require a written application of sorts, whether it is according to their own predetermined template or whether they allow the applicant to present the information in their own way. Some donors are happy to consider applications for funding throughout the year while others establish a calendar of deadlines during the year, or even over a two or three-year period in which applicants must submit. It is a common courtesy to acknowledge all applications but many foundations that are inundated with requests do not do so.

As mentioned previously, some donors choose to assess the merit of an application without much process and form-filling, relying instead on developing relationships, getting to know the organisation well and seeing first-hand what it does. This may take just as long as a more formal process requiring detailed written applications. Some foundations do both; investing a great deal of time and energy in assessing and reviewing an organisation up front before committing to fund it. So they may have a three stage written application process; the first stage containing threshold information, the second stage requiring more detail and supporting documentation and the third stage involving answers to specific questions, as well as conducting site visits and interviews with the organisation’s management.

An assessment of the following elements of an application may be appropriate:

Once the application has been assessed, then it needs to be declined or approved. As previously mentioned, if the philanthropist is providing direct funding to organisations without any legal structure in place, this can be a very simple process. However, if a trust has been established, then the trustees need to pass a resolution approving the grant, usually done at a trustee meeting where a number of applications are considered. If the trust deed allows it, the trustees can indicate their decisions by emails and the emails can be proof of a “virtual meeting”.
Grants are often approved with conditions. These can be conditions relating to the timing of the funding, the ability of the organisation to raise matched funding or any other conditions precedent that are required before funding is released. The funds can be given either in one lump sum or in tranches against milestones or against approved third party quotes. Beyond these standard requirements, some donors sometimes include other requirements that are specific to the organisation or project.
It is good practice to ensure that the donee agrees to the conditions and accepts the grant in writing. Sometimes finalising the grant contract requires significant discussion and negotiations. If it is large grant for a complicated, long project such as a building project the process could be drawn out. In other circumstances, the whole application, review and decision-making process can be done in a day, if for example the donor is responding to relief aid for a natural disaster or some other emergency relief.

It is up to the philanthropist to decide how engaged or ‘hands off” she wishes to be during the grant period. This will depend on the approach or style she adopts, the complexity of the grant and her personal interest (or what she expects from the managers of her trust of foundation). It is usual for representatives of the philanthropist to visit the organisation that has received the grant and to see their work in action during the grant period. Sometimes unscheduled visits may be included. Other less time consuming ways of keeping in touch may be preferred, such as emails and telephone calls.

However, almost all donors expect some type of reporting; either at the end of the grant period or at specific intervals as well as at the end of the period. Some foundations are not prescriptive about the content of a report, satisfied with a set of audited financial statements and a general annual report. Others are far more specific about the content of the report, with reporting templates and agreed upon indicators and monitoring frameworks required. It is helpful to think carefully about what reporting is required and, more importantly, how the information is used. There is no purpose in asking for all sorts of qualitative information, quantitative data and detailed financial reporting if it does not directly feed into a decision-making process.

Finally, there is a stage, usually towards the end of the grant period, when the donor must consider whether to continue funding the organisation, which will usually request further support. If the donor is considering ending the funding, this is often a difficult decision because personal relationships and expectations have been established. Some of the common reasons for ending a relationship are:

What does the donor do if the grant required specific, tangible outcomes that have not been met? Most donors would not view this as grounds for ending the relationship if the organisation carried out the project in good faith, is honest about the shortcomings and has learnt from the experience and adjusted its programme. If the philanthropist decides to end the relationship, a responsible approach is to give the organisation sufficient clear written notice, with supporting “exit” grants of one or even two years. Proven fraud or serious mismanagement at an organisation would be an exception to this rule. 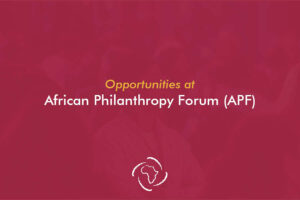 APF is currently seeking to engage a dynamic, passionate, result-oriented and self-motivated individual to fill 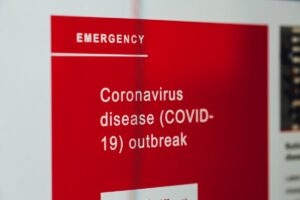