In 2019, a year after the film Black Panther was released, the fictional country Wakanda was the fourth most mentioned African country on Twitter, after Egypt, South Africa and Kenya. The fact that Africa’s fourth most talked about country does not exist tells us two things:

This data point was unearthed during a literature review to understand what insights already exist about narrative in Africa in the media. The review was part of our mission to unpack narrative and give some real substance to the phrase; “we need to change the African narrative!’.

We analysed 56 documents of literature (post 2000) including research reports, books, chapters, and academic journal articles. Although by no means comprehensive, the literature review does provide a snapshot into the narrative space. We intend to follow this up with more research to build a comprehensive understanding of narrative and where we can intervene to shift and support narratives about and within Africa.

What did we find?  A few surprising facts like the one about Wakanda, but admittedly nothing we did not already suspect.

THINGS YOU NEED TO KNOW: Western narratives about Africa in the media are around two narrative strands, i.e. Afro-pessimistic and Afro-optimistic. The main themes found were:

The good news is that the last 10-15 years has seen quite a shift in African narratives. The continent has been highlighted as a good destination for investment, with high GDP growth rates, an increase in peaceful elections, stability, falling poverty, and the spread of technology.

Despite the progress, the literature on Afro-optimism points out a number of flaws in the narratives that make them less impactful.  For example, the “Africa rising” narrative suggests the continent is one country and there is no sense of where economic growth is taking place; African economies are only written about when it favors Westerners; the continent is viewed through a Western and sometimes racist lens.

Studies focused on African narratives about Africa in the media are surprisingly few – that was another surprise. Most of the studies we found looked at how South Africa portrays itself against other African countries. We were able to find studies from Kenya, Cameroon, Ghana and DRC and across these countries, narratives often mimic western narratives about Africa, and many times the sources for these stories came from western news services. The irony is that Africans are learning about themselves from western sources.

The main storylines when African countries report on each other are around ethnic conflicts being a large problem and that corruption is rife. The fact that Africans had very little interest in or good things to say about each other was another surprising fact. With the recent launch of the African Continental Free trade Area (Afcta), a game changer for Africa’s development with the potential to unite 1.3 billion people, a genuinely connected Africa at all levels is even more critical and narrative work is an important contributor to connecting Africans and changing perceptions.

WHAT IS MISSING?
Clearly, there are huge gaps in what we know about narratives within Africa but the literature review revealed some solutions that could inform ANF’s approach. The reports suggested the following:

All these solutions have merit, but none touches on the use of pop culture as a potential tool for creating narrative change. There is evidence to show how quickly pop culture can move an issue from the margins of public consciousness to its center and we saw how the fictionalised Wakanda became a huge topic of interest for many.  Liz Manne the Editorial Director of the #PopJustice report series, which looks at the role of pop culture in shaping narrative, said this: “pop culture is changing and influencing public opinion at a rate never seen before”.

So, if we want to push Wakanda out of the top 5 of Africa’s most talked about “countries” we are going to need to engage differently and ANF is poised to explore new, ‘untried strategies’ to advance its mission to shift stereotypical narratives about Africa.

An accomplished writer, journalist, producer, and publisher, Makura brings 25 years of experience working in the media and communications industries across Africa, and understands the importance of uplifting nuanced narratives – and who gets to tell whose stories. For many years, she was the African Anchor and field reporter for South Africa’s award-winning news and actuality show, Carte Blanche. She also created one of the first websites to serve as a repository of positive facts about the continent and showcase its achievements called Africa Our Africa. Makura recently wrote one of South Africa’s best-selling books, Africa’s Greatest Entrepreneurs, on the success stories of the top entrepreneurs on the African continent. She holds an Honours degree in Politics, Economics and Law from Buckingham University in the UK. 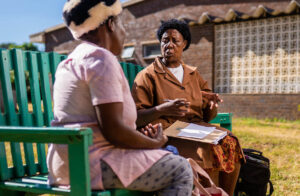 Disparities in Funding for African NGOs 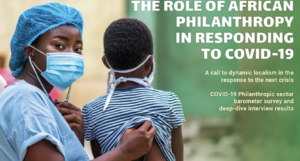 The Role of African Philanthropy in Responding to Covid-19